If you have ticket stubs – and cash – to get back to the club, please return them to the office as soon as possible, the postal address is:

To be included in the draw, tickets need to be at the club by Friday afternoon. They can also be handed to The Fundraising Team at the start of the Christmas Party at the Upton British Legion on Friday, 21st December.

Furthermore, you can purchase tickets right up to the day of the draw via this webpage.

Tickets for the Christmas Party at Upton British Legion on 21st December, which begins at 7:30 pm, are available from the club office and also on the door on the night. 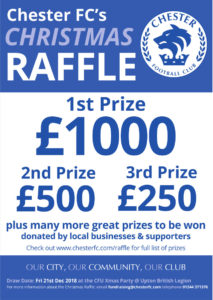