City Fans United can confirm that Chairman David Harrington-Wright has decided to stand down from his current role as Chairman as well as membership on the Board of City Fans United.

Formally elected to the Board in October 2017, before taking over the role as Chairman in April the following Year, David oversaw a significant period of stability and revival for the Club which had been challenged through a financial crisis as well as subsequent flooding and the Covid-19 pandemic during his tenure.

In December 2019 David took the decision to temporarily step back from his role as Chairman to support and care for his wife Fiona who sadly passed away in January 2020. He has now decided to permanently stand down from his role which will allow him to focus on his own businesses and personal well-being during this difficult time.

David has agreed to kindly support the board through this period of transition for which the City Fans United board are grateful for.

Upon leaving his role and the Board David stated;

“ I have been truly honoured to be the Chairman and a board member of my beloved Chester FC, and it’s fair to say the almost three years on the board have been a roller coaster!

I would like to think I leave the club in a better position than when I joined – but it’s not been solely down to me. The hard work of all my fellow board members and many many volunteers is something I am immensely proud of, and I thank each and everyone of them.

A great thanks from me to all our sponsors as well who have stood by us in difficult times, and also to Stuart Murphy without whom we may not have seen as much quality football in the past year as we have!

Finally a great thanks to all the fans – the support I have received from the majority especially over the past year with the issues I had away from the club has been humbling.

I wish Chester the best going forward whenever Football recommences, as first and foremost I have always been a blue!’’

At the City Fans United Board Meeting held on 30th March 2020 it was confirmed that current Vice-Chairman Andrew Morris would step up into the role of Chairman initially until the next AGM scheduled for 22nd October 2020.

Under David Harrington-Wright’s stewardship this Club has progressed significantly on and off the field and I speak on behalf of all my fellow Board members when I say he will be missed’.

The board of City Fans United can confirm that following the recent resignation of Calvin Hughes, Andrew Morris has now been elected as vice chairman at the board meeting on Monday 7th January. 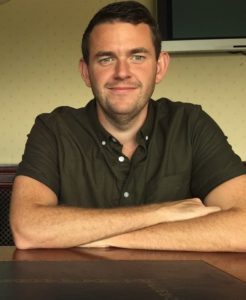 Andrew joined the board in October 2017 and assumes the position with immediate effect.

As a reminder, the formal members meeting will take place in the Blues Bar at the Swansway Chester Stadium, next Thursday (17th January) at 7.30pm.