It’s been a manic few months following the efforts of bringing realistic and attractive season ticket and matchday prices to the table, but the Fan Engagement Working Group have ploughed on looking at various aspects of the matchday experience as well as putting our thoughts in to making the CFU membership more attractive to members.

Below, is a list of part of what we’ve been focussing on during the last couple of months:

Other Items being looked at/discussed:

So, as you can see lots going on with the Fan Engagement and Membership section headed up by Guy Lister, and we’re always looking for more members, so if you would like to join our working group then please email fewg@chesterfc.com to become involved.

City Fans United are delighted to announce that the membership target of 2018 members by the end of the year 2018 has been hit and surpassed with 2 weeks to spare!

The Fan Engagement Working Group (FEWG) have confirmed that together with the CFU Junior Blues, we now have over 2018 members!

In celebration of this, one City Fans United member will be drawn at random to win a voucher to the value of £20.18 to spend in the club shop, with the draw taking place later this week.

Jeff Banks, director of Fan Engagement was delighted the target number had been hit, “Following the January fans meeting at Chester FC, the FEWG was set up and we set out to achieve a goal of 2018 members by the end of 2018, and that is exactly what has been achieved. Just under 12 months ago we had barely 1000 members so to double that number is brilliant. Naturally we want to increase that number further and would encourage anyone who hasn’t joined yet to do so. We’ll shortly be looking to make being a CFU member even more attractive and are working together with local businesses to provide our members with discounts.”

Banks also confirmed that the FEWG were working on a number of themed match days for the New Year following on from the Remembrance and Retro Day themes that took place in November and December respectively, “Our aim is to improve the matchday experience for supporters and we have a Christmas theme for this coming Saturday and have already got a number of planned themes for 2019 that we are also working together with the Community Trust on too, and we hope everyone will take part and enjoy those theme days.”

Chester FC’s Season Ticket target of 1000 is getting closer and closer!

A few weeks ago, you may recall that two of our Legend Lounge members came forward and wanted to help boost the number of sales by offering to reward one lucky fan who purchased a Season Ticket before the Earlybird deadline, and both Ian Swettenham of Swettenham Chemists and Alan Case have not just honoured that offer, but have actually tripled their offer and offered to cover the cost of 3 season tickets purchased!

The Draw, sponsored by Swettenham Chemists and Alan Case, was made independently on Wednesday 18th July, and saw the following names drawn out of the hat:

All three lucky winners have been notified and will be offered the refund of their season ticket!

Ian Swettenham said, “Swettenham Chemists were pleased to support the Season Ticket prize draw. We hope it encouraged fans to purchase their tickets in the Early Bird window and contributed to all the efforts from volunteers to push the season ticket number towards the 1,000 target.”

Jeff Banks, Director of Fan Engagement, thanked both Ian & Alan for their contribution and generous offer, “When the Fan Engagement Working Group (FEWG) were initially approached by both Ian and Alan, we were blown away by their generosity, but the fact that they have tripled that offer and rewarded three fans is just brilliant. I’m sure I speak on behalf of everyone connected with the club that we thank both Ian and Alan for their very kind offer, and I’m sure the winners were absolutely delighted when they heard the news!”

Remember, you can still help us reach that target of 1000 season tickets sold, by contacting the club on 01244 371376 during office hours and also prior to our pre season friendlies too at the club’s ticket office.

Season Tickets can also be collected on Thursday 26th July, at a special event taking place in the Blues Bar at the Swansway Chester Stadium. The event will also see Bern & Jono appear after their training session to give an update on pre season training and latest signings. 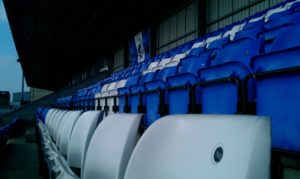