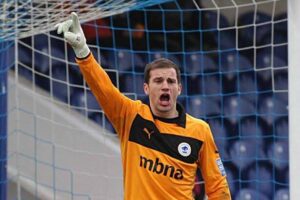 City Fans United are delighted to learn that former Chester City and Chester FC goalkeeper, John Danby, has become the latest inductee in to the Hall of Fame.

The Chester Former Players Association, who present nominations for the Hall of Fame to the club board, released the news that Danby, who featured in Chester City’s later years and the reformed Chester FC’s early years, had been granted the accolade that is shared by the likes of the late Gary Talbot, Daryl Clare, Stuart Rimmer, and George Horan to name but a few.

The release reads, “Chester’s record-breaking goalkeeper John Danby, a player whose career with the Blues stretched over both versions of the football club, is to join the club’s Hall of Fame.

Danby was originally signed by Mark Wright for Chester City from Kidderminster Harriers in 2006, making 165 league appearances before the club folded in 2010. He was ever-present in two of those campaigns, as well as the ill-fated 2009-10 season, including Chester City’s final match, against Ebbsfleet in February 2010. Such was his consistency that he missed only five league games in those four seasons, breaking Mike Metcalf’s 40-year-old record for the most consecutive appearances with 128 and extending that tally to 133. He was voted Player of the Season in 2006-07.

He signed for Eastwood Town after the demise of the original club but 18 months later answered the call from Neil Young to return to the Deva Stadium for the second campaign of the newly-formed Chester FC. He stepped into a team which had just won the EvoStik North in its first season and played a major part in the club’s next two consecutive championships, the EvoStik Premier in 2012 and the Conference North in 2013. He set another club record, for the most consecutive clean sheets held for over 30 years by Grenville Millington, going eight games without conceding a goal in the 2011-12 season. That achievement helped him win the non-league Goalkeeper of the Year award.

Having played nearly 300 games for both versions of the club, Danby left Chester in the summer of 2014 when the club’s daytime training schedule meant he couldn’t combine it with his other career as a personal trainer. He spent last season with Flint Town United.

Chair of the Former Players Association Alan Tarbuck said: ‘John has a fantastic record at Chester – it isn’t just the number of games, it’s the quality of his performances as well. He is an outstanding goalkeeper and a great professional, and we were lucky to have him representing Chester. He played a big part in the new venture of Chester FC and I would like to congratulate him, on behalf of all the former players, on being elected to the Hall of Fame.’

The formal presentation to John, which would normally take place on the pitch at a home game, will inevitably have to wait until football resumes.”

City Fans United would like to congratulate John on this award, and look forward to seeing him receive the official recognition on the pitch at the Deva Stadium in the near future.

You can read more about the Chester Former Players Association here